Addis Ababa — Ethiopian security forces have thwarted an alleged kidnapping plot by members of Somalia Islamist extremist group, against foreign United Nations aid workers based in Ethiopia's Somali region.
According to Ethiopia's National Intelligence and Security Service (NISS), eight suspected members of the al-Qaida allied Al-Shabaab group who were in possession of weapons to carry out the kidnap are now under police custody. Foreign aid workers of the World Food Programme and the UN's Development Programme at Dollo refugee camp were the prime targets of the kidnapping, officials said on Monday.
The suspects were planning to take the abducted aid workers to neighbouring Somalia to extract a ransom.
Backed by the United States, Ethiopia sent troops to strife-torn Somalia in 2006 to overthrow the Islamic Courts Union (ICU) from de facto power in Mogadishu and withdrew in 2009 and later redeployed forces to help the weak Somalia army battle al-Shabab who had been in control to most parts of the country.
Somalia's al-Shabaab group had in the past repeatedly issued warnings against Ethiopia's military intervention and the country has since been a target of different attacks in retaliation. However the Horn of Africa nation has foiled many terror attacks plotted by the group and has detained many infiltrated members of the terrorist cell.
Earlier in January Ethiopia's security forces arrested 15 militants who were trained by al-Shabaab in Somalia and Kenya. Officials then said the suspects were in possession of arms, military training manuals and jihad war videos were preparing terrorist attacks in Ethiopia's Somali and Harar regional states.
Posted by Guihon at 4:51 AM No comments:

The arrests were the latest in a crackdown on people charged with having links to fighters in neighboring Somalia, where Ethiopia has deployed troops to support Mogadishu's battle against al Shabaab and its six-year insurgency.


The group wanted to abduct foreigners working for the U.N. World Food Programme and the United Nations Development Programme in Ethiopia and take them to Somalia to demand a ransom, the National Intelligence and Security Service (NISS) said.


"The eight were caught red-handed with arms as they plotted to carry out the kidnappings," NISS said in a statement.


An Ethiopian official told Reuters the group planned to carry out the abductions in a camp for Somali refugees in the Ethiopian frontier town of Dolo Ado.


The region has also been plagued by a low-key rebellion for nearly two decades, though residents now say local rebels have largely been weakened by successive government offensives.


Monday's announcement comes two months after authorities said they arrested 15 suspected militants who were accused of being trained by al Shabaab.


An Ethiopian court convicted 10 other people in January of preparing strikes on political and economic targets in Ethiopia.


Somalia's al Shabaab group has threatened to attack Ethiopia in revenge for its military interventions.


Ethiopia fought Islamist rebels in Somalia in 2006 to 2009 and sent troops back in 2011 to fight al Shabaab, opening a third front alongside Kenyan troops and an African Union (AU)mission.


The campaign in Somalia has gained ground in the past two years. Al Shabaab, which is allied with al Qaeda, withdrew from the southern port of Kismayu in September, its last major urban stronghold.


(Reporting by Aaron Maasho; Editing by Edmund Blair)
Posted by Guihon at 4:25 AM No comments:

TPLF Reshuffling and Retirement in its 9th Convention

Concluding its ninth convention, the senior partner in the ruling coalition, TPLF has elevated for the first time since its formation, a woman to its political bureau, making two of the nine politbureau members women, Fortune learnt.
Tirfu Kidanemariam, who was vice chairperson of the Tigray Women Association (TWA) in 2008, has now joined Azeb Mesfin in the TPLF's top political body. Azeb was elected to the political bureau in 2010, the first woman to ever make it that high in the TPLF. Tirfu is a spouse to the party's chairman and chief of the regional administration, Abay Woldu. She is head of TPLF's all too powerful organisational affairs bureau. She has been elected to the central committee of the TPLF since 1999, and has also served as head of the region's justice bureau.
As expected by those following the region's political development, Tsegaye Berhe, a former chief of the regional state and current chairman of the National Security Council; and Abadi Zemo, Ethiopia's ambassador to Sudan, have left the political bureau, upon their request, according to sources. They are replaced by Alem G. Wahid and Gebrehawariya Woldu, both veteran political operatives of the regional administration, heading various administrations at zone levels, according to our sources.
TPLF central committee, which has seen the departure of nine of its veteran members such as Seyoum Mesfin, Arkebe Oqubay, Brehane Gebrekirstos and Zeray Asgedom, has left its chairman and deputy intact. Abay Woldu and Debretsion Gebremikael will continue to lead the party as chairman and deputy.
The three other parities in the coalition are holding their respective congresses, thus elections to their political bureaus is expected soon. Political pundits are expect hardly any change in the compositions of their senior leaders, however.
Posted by Guihon at 2:01 PM No comments: 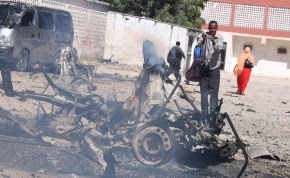 The wreckage of a car bomb after it exploded outside a Somali government building in Mogadishu (file photo).
Ethiopian security forces have arrested four members of the Al-Qaeda allied Somalian Islamist extremist group, al-Shabaab.
According to the National Security and Intelligence Agency, the militants were arrested on Friday in Moyale town near the border with Somalia.
The suspects are accused of plotting terrorist attacks in Ethiopia's Somali region under the assignment of al-Shabaab.
An Ethiopian police source told Sudan Tribune that the suspects were planning to attack and kidnap foreign aid workers from a camp for Somali refugees.
Ethiopia has been a target of attacks by al-Shabaab militants in retaliation for its military intervention in neighbouring Somalia.
Ethiopia sent its troops to strife-torn Somalia in 2006 to help the weakened Somali government oust the Union of Islamic Courts (UIC) and to battle al-Shabaab who at the time were in control of most parts of the country.
The Horn of Africa nation has been #the victim of a series of terrorist attacks in the past seven years.
Addis Ababa has repeatedly blamed its arch-rival Eritrea for the attacks on its soil, an allegation Asmara has always denied.
Ethiopia and Eritrea fought a bitter border war from 1998-2000 that killed over 70,000 people, with the two neighbours routinely trading accusations of helping rebels to destabilise their respective countries.
In January, Ethiopian security forces similarly arrested 15 members of an al-Qaeda affiliated East African terrorist cell.
Government officials said that the terror suspects - who were in possession of weapons - had been trained by al-Shabaab forces in Kenya and Somalia in order to carry out terrorist attacks.
Posted by Guihon at 4:31 AM No comments:

February 28, 2013 (MEKELLE, Ethiopia) - In connection with the 38th founding anniversary of the Tigray People’s Liberation Front (TPLF), Ethiopia’s northern Tigray region has freed hundreds of prisoners who have been serving prison terms.
Accordingly, a total of 965 prisoners who met criteria set by the state Pardoning Board are freed. Among the released 33 were women.
Tigray police commission Commissioner, Zeamanuel Legesse, said no pardon grant was made to prisoners who committed series offenses, such as murder, rape or those convicted of corruption.
The commissioner called on the prisoners to learn from their past mistakes, to stay away from criminal activities and be productive citizens.
The freed prisoners have pledged to repay their society and to the country at large by actively taking part on different developmental endeavors.
During their prison stay, prisoners have received different technical and vocational trainings that could support them lead their normal life.
Ethiopia’s Pardon and Amnesty law - which intended to promote and strengthen the values of solidarity, forgiveness and national reconciliation - allows pardon grant to prisoners who have shown sincere regret for their crimes and those who demonstrated good disciplinary improvement at correction center.
Every year thousands of prisoners are released across the country as nation marks its own New Year celebration on September 11.
TPLF which is the major part of the leading party, Ethiopian People’s Revolutionary Democratic Front (EPRDF), was founded on14 September 1974 by a group of seven ethnic Tigrayan university students.
The movement began in Northern Tigray region turned into coalition of rebels and finally toppled the military Junta in 1991 after 17 years of bitter struggle for which tens of thousands of martyrs paid for with their lives to bring a democratic order.
Posted by Guihon at 3:15 AM No comments:

Ethiopia's orthodox church has elected a new leader of the influential body in the predominantly Christian nation.
Abune Matias, 71, was Thursday named the 6th Patriarch of the church officially known as the Ethiopian Orthodox Tewahedo Church.

AP
New leader of Ethiopia's orthodox church... View Full Caption
Abune Matias, currently serving as Archbishop of the church in Jerusalem, accepted the appointment. He is highly contested due the dumped election.
The election comes amid disputes surrounding the leadership of the powerful church, which boasts of some 40 million adherents, and a long history of conflict with the central government.
The Ethiopian church was under the Coptic Orthodox Church of Alexandria. In 1959 it broke away to be independent and started appointing its leaders.
Posted by Guihon at 3:11 AM No comments: