Posted by Guihon at 6:10 AM No comments:

Ethiopia is Djibouti and Djibouti is Ethiopia and Eritrea is Nobody - geeskaafrika.com

Ethiopia is Djibouti and Djibouti is Ethiopia
55 71 Google +0
Djibouti (HAN) May 17, 2014. Regional business news update.  World Bulletin.. The Ethiopian port authority received nine new Ships (vessels) worth over $300 million from China at a ceremony organized in Djibouti Port. According to Ismail Omar Ghelle, “We believe that Ethiopia is Djibouti and Djibouti is Ethiopia, no difference at all,” president  added, going on to reiterate that the new vessels will further help speed up the ongoing development endeavors in Ethiopia.

“The vessels are not only Ethiopian assets but they are also Djibouti’s properties,” Ethiopian Prime Minister Hailemariam Desalegn said at the ceremony.

“The vessels indicate the rapid development in Ethiopia,” he added.

Named Bahri-Daar after the capital cities of one of the regional states of Ethiopia, the vessels were built with loans from the Chinese government. Most of Ethiopia’s exports and imports are transported through the Port of Djibouti, which is located 900km east of Ethiopian capital Addis Ababa.

“The relation between Ethiopia and Djibouti is not limited to a government-to-government level but it has been intensified in people-to-people ties,” Ismail  said.

The Djibouti president added to say that relations between the two neighbors are boosting in different spheres, including the economic and social fields. “Djibouti gives a port service to Ethiopia but it does not consider that it is giving the service to another country but regards it as it is doing it for itself,” Ismail concluded.

“We believe that Ethiopia is Djibouti and Djibouti is Ethiopia, no difference at all,” Ismail strongly said, going on to reiterate that the new Ships (vessels) will further help speed up the ongoing development endeavors in Ethiopia.

Ethiopia had used Eritrean ports until 1998 when the two countries engaged in a war of their border disputes.  Following the war, Ethiopian began to use Djibouti ports to export its products
-

- See more at: http://www.geeskaafrika.com/ethiopia-is-djibouti-and-djibouti-is-ethiopia/3378/#sthash.xoHJn7S6.dpuf
Posted by Guihon at 6:27 AM No comments:

Government releases a statement about ongoing Oromo students' protests a...

Posted by Guihon at 5:52 AM No comments: 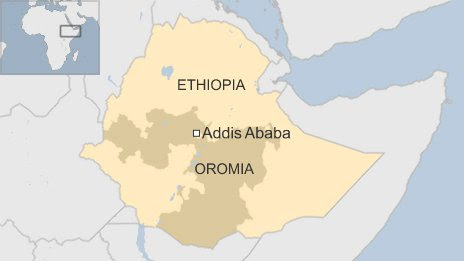 At least nine students have died during days of protests in Ethiopia's Oromia state, the government has said.
However, a witness told the BBC that 47 were killed by the security forces.
She said the protests in Ambo, 125km (80 miles) west of Addis Ababa began last Friday over plans to expand the capital into Oromia state.
The government did not say how most of the deaths had been caused but the Ambo resident said she had seen the army firing live ammunition.
Continue reading the main story

James HassamAddis Ababa
The student protestors are from Ethiopia's biggest ethnic group, the Oromo, numbering around 27 million people.
Oromia is the country's largest region, completely surrounding the capital Addis Ababa, although the city is itself part of the Amhara region.
Its people speak their own language - Oromifa - and see themselves as very different from the Amhara.
The protesters believe they face losing their regional and cultural identity if plans to extend Addis Ababa's administrative control into parts of Oromia get the go-ahead.
Some have also raised fears of the potential for land grabs.
The so called "master-plan" for Addis Ababa is currently out for public consultation and the government says people are being given opportunities to raise their concerns.
Officials say the plan has been well publicised and will bring city services to poor rural areas.
The protestors claim they merely wanted to raise questions about the plan - but were answered with violence and intimidation.
"I saw more than 20 bodies on the streets," she said.
"I am hiding in my house because I am scared."
The Ambo resident said that four students had been killed on Monday and another 43 in a huge security crackdown on Tuesday, after a huge demonstration including many non-students.
Since then, the town's streets have been deserted, she said, with banks and shops closed and no transport.
She said teaching had been suspended at Ambo University, where the protests began, and students prevented from leaving.
In a statement, the government said eight people had died during violent protests led by "anti-peace forces" in the towns of Ambo and Tokeekutayu, as well as Meda Welabu University, also in Oromia state.
It said one person had been killed "in a related development" when a hand grenade was thrown at students watching a football match.
The statement blamed the protests on "baseless rumours" being spread about the "integrated development master plan" for the capital.
BBC Ethiopia analyst Hewete Haileselassie says some ethnic Oromos feel the government is dominated by members of the Tigre and Amhara communities and they would be loath to see the size of "their" territory diminish with the expansion of Addis Ababa, which is claimed by both Oromos and Amharas.
Posted by Guihon at 12:22 AM No comments: