Posted by Guihon at 6:20 AM No comments:

By AFP
shares
Ethiopian Foreign Minister Tedros Adhanom on Tuesday launched his candidacy to lead the World Health Organization, insisting it was time for an African to occupy the key UN job.
"The fresh view we can bring from our continent and the perspective of a developing country can help improve the global health situation," Tedros told reporters in Geneva, as he announced his desire to succeed WHO chief Margaret Chan of Hong Kong when she steps down next year.
Tedros, a doctor by training, highlighted the experience he acquired during his seven years as Ethiopia's health minister until 2012, when he implemented widespread reforms that among other things allowed the country to slash its infant mortality rate by two thirds. 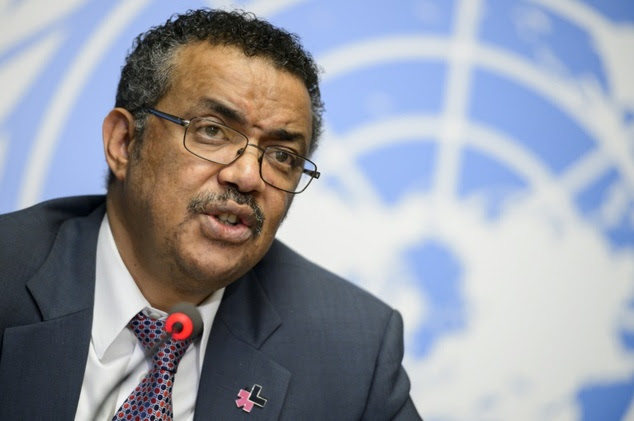 +1
Ethiopian Minister of Foreign Affairs Tedros Adhanom Ghebreyesus attends a press conference launching his candidacy to the post of Director General of World Health Organization on May 24, 2016, in Geneva ©Fabrice Coffrini (AFP)
He also said he had held top international health jobs and helped guide the Global Fund to Fight AIDS, Tuberculosis and Malaria through far-reaching reforms.
The 51-year-old said that uptil now global health had been seen "from the rest of the world's perspective only", adding: "But as you know, Africa and many of the developing countries carry most of the burden," he said.
"It's time for a director-general who has lived some of the most pressing challenges facing our world today, as I have lived in Africa."
His candidacy has the unanimous backing of the African Union and Tedros is among the first to officially throw his name into the hat.
Former French health minister Philippe Douste-Blazy has also been campaigning for the post in Geneva this week on the sidelines of WHO's main annual assembly, and Pakistan has thrown its weight behind the candidacy of former health minister Sania Nishtar.
Candidates have until September 22 to join the race and next May the WHO will elect the winner, who will take the over as director-general in July 2017.
Posted by Guihon at 1:52 PM No comments:

May 12, 2016 (ADDIS ABABA) — Ethiopia authorities said Thursday that they foiled what they described as a "plot" by Eritrean mercenaries to stage a terror attack in the country.

Eritrea, which borders Sudan and Ethiopia, has been dubbed the North Korea of Africa (HRW)

The heavy armed mercenaries were captured in a jungle at the southern tip of the country and were conspiring to launch a terrorist attack.

According to the task force, they were captured in a surprise military operation carried out by security forces on 6 May 2016.

Officials told Sudan Tribune that the Ethiopian intelligence agency had the information over the planned attack before the armed mercenaries depart from Eritrea.

According to the officials security forces captured most of the terrorists with their armaments however refuse to disclose on their total number.

Unspecified number of the armed group who tried to escape were also killed.

The terrorists whose travel documents shows to have been prepared by the Eritrean regime traversed Ethiopian borders from Moyale in neighbouring Kenya.

“The terrorists first travelled to Uganda, and they made their way to Kenya before they arrived at their final destination, South Ethiopia”

The captured militants were allegedly trained and armed by the regime in Asmara.

Eritrea gained independence from Ethiopia in 1993 after a 30-year guerrilla war however the two neighbours fought a war during 1998-2000 over territorial disputes which killed over 70,000 people.

As their border dispute never settled the two countries remain at No war - No peace situation.

Both countries routinely trade accusations of arming and supporting one the others’ rebel group.

At a press conference with local journalists, Communication minister Getachew Reda today hinted that the Ethiopian government will consider actions to stop these unfolding Eritrean provocations.

Previously, Ethiopian forces have penetrated deep into Eritrean territories and attacked several military bases including those bases used by militants who are given sanctuary by Eritrea to carry out attacks against Ethiopian targets.
Posted by Guihon at 8:35 AM No comments:

A group of gunmen, suspected to be from Eritrea, have attacked and killed over 20 Ethiopian soldiers in the southern region of Arba Minch.
The surprise attack, which occurred on Wednesday, led to the death of the regional army commander. A number of soldiers also sustained injuries in the attack. The injured have since been transported to the hospital where they are receiving treatment.
Government forces and the assailants engaged in a shootout which lasted for hours. Several gunmen were killed in the shootout while others have been arrested.
The exact number of the assailants have not yet been disclosed.  The number of the deceased and those in custody have not also been revealed.
The gunmen are allegedly from Eritrea. The men are believed to have sneaked into Ethiopia via Moyale, a border town with Kenya.
Officials have since launched an investigation into the deadly attack. Several people in Arba Minch have been reportedly arrested in connection with attack and gunmen.
Addis Ababa has accused Eritrea of masterminding a number of cross-border attacks. However, Asmara has routinely denied the accusations.
In February, a group of gunmen from Eritrea allegedly kidnapped over 400 Ethiopian gold miners from the Tigray region. No group has claimed responsibility for the mass kidnappings.
A similar incident occurred in 2012 when gunmen, believed to be Eritrean soldiers, kidnapped 100 miners in the Tigray border region.
Ethiopia has also been accused of carrying out attacks within Eritrea’s borders. According to Addis Ababa, the attacks were conducted in retaliation for Asmara’s continued raids and cross-border kidnappings.
The two East African countries fought a two-year long war over a border dispute in 1998. The conflict between the neighbors led to the death of over 70,000 people. Despite the cessation of hostilities, the border dispute is yet to be resolved.
Photo: AP/Karel Prinsloo
Posted by Guihon at 2:39 AM No comments:

An Ethiopian Professor Tekalign Mamo, soil scientist and former Ethiopian State Minister of Agriculture wins the 2016 International Fertilizer Industry Association (IFA) Norman Borlaug Award.
He is awarded for his outstanding contribution to improving soil health and natural resources bases in Ethiopia, benefiting over 11 million smallholder farmers.
Efforts spearheaded by Professor Mamo to reduce the country’s severe land degradation, soil acidity and nutrient deficiencies that hinder crop growth have played a critical role in Ethiopia’s agricultural renaissance. Between 2000 and 2014, grain production tripled in Ethiopia, bolstering progress towards poverty and hunger reduction goals and earning the country recognition as one of the fastest growing economies in the world.
Despite the severe El Niño-induced drought dealing a serious blow to this progress throughout 2015-16, farmers have been better equipped than ever to cope with extreme weather. This is thanks in part to the decades of community-based land rehabilitation work launched during Professor Mamo’s tenure as State Minister and carried out by the Ministry of Agriculture and Natural Resources, the Regional Bureaus of Agriculture, development partners and the farming community.
“I am honoured to receive this award, and am proud Ethiopia’s leadership in addressing soil health issues is being recognised internationally,” comments Professor Mamo. “Much remains to be done to continue Ethiopia’s transformation and lift even more people out of poverty, but an accolade such as this serves as encouragement for my fellow citizens and African colleagues to continue this important journey.”
Since 2005, through a national initiative that Professor Mamo led, Ethiopia has rehabilitated more than 15 million hectares of degraded land through a successful community-based participatory watershed development strategy, which not only re-greened degraded lands and improved income generation opportunities for farmers, but also built the lands’ resilience to future shocks.
In 2006, he acted as Advisor (with the rank of state minister)  to the then Deputy Prime Minister and Minister of Agriculture and recommended the launch of a nationwide acid soil rehabilitation programme through the application of lime—a technology highly adopted and appreciated by small holder farmers.
Professor Mamo is also responsible for conceiving of and recommending a countrywide digital soil fertility survey of agricultural land, the Ethiopian Soil Information System (EthioSIS), which is the most advanced soil fertility mapping exercise on the African continent.  EthioSIS has analysed soils in  570 administrative districts to date, revealing significant deficiencies in nitrogen, phosphorus, potassium, sulphur, zinc, boron, copper and molybdenum in agricultural soils. It is estimated that accurate information on soil nutrient needs, if implemented at a full scale, can increase farmers’ yields by about 65 per cent on average.
In addition to millions of smallholder farmers, more than 500 commercial growers are now using custom-made fertilizers that Professor Mamo and the EthioSIS project recommend. These are currently made available to farmers through five local blended fertilizer production plants across the country, as well as through recommended compound fertilizers that the country imports.
More than 4.5 million farmers have been made aware of the importance of these new fertilizers, through tens of thousands of new fertilizer demonstrations conducted by model farmers and at farmers’ training canters (FTCs), field days, experience sharing visits, radio communications and the distribution of leaflets and extension guidelines in local languages.
Poor soil health remains one of the most pressing challenges facing African agriculture.  Nutrient losses from African soil have been estimated to cost the continent USD $4 billion each year, threatening the livelihoods of many of its poorest people. Fertilizer use in Africa continues to lag behind other regions, with Africa using only around one-tenth the amount of fertilizer as in North America (10 kg/ha versus over 100 kg/ha), meaning crop yields are also considerably lower.
“This is due to little or no attention being given by the responsible bodies in Africa, mainly sub Saharan Africa, to identify  the nutrients soils lack, and which fertilizers should be disseminated where,” comments Professor Mamo. ‘’Farmers will not shy away from using fertilizers if they prove it can double or even triple their yield per unit of land, which is often the case under balanced fertilization and sustainable soil management conditions’’ he adds.
“Professor Mamo’s visionary work has demonstrated the immense impact improving soil health and natural resource bases can have for improving the food security and livelihoods of the most vulnerable,“ comments Charlotte Hebebrand, Director General of the International Fertilizer Industry Association, which gives the IFA Norma Borlaug Award annually. “He thoroughly deserves this award for his outstanding commitment to soil health, to making relevant fertilizer more accessible and effective in the region and for putting a spotlight on the importance of developing more customized fertilizers.“
Professor Mamo holds a PhD in soil chemistry and soil fertility from the University of Aberdeen in Scotland and in addition to his government roles, he has held academic, research, and senior management roles at Haramaya University. He has received several awards for the quality of his work, including the 2014 African Green Revolution Yara Award, and a UN FAO Special Global Ambassadorship role for 2015 International Year of Soils .
- See more at: http://newbusinessethiopia.com/index.php/resource/64-agriculture/986/986#sthash.oQo2aAQe.dpuf